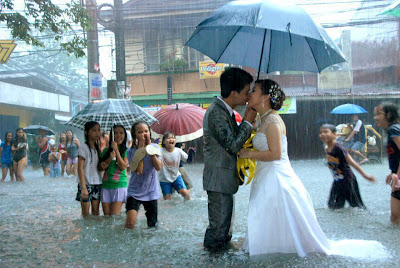 Amidst the heavy rain and flooded streets, it seemed like not even mother nature could stop the couple Ramoncito Campo and Hernelie Ruazol Campo's wedding.

Two White Guys' Reasons Why They Love The Philippines

20 Reasons Why I Dislike The Philippines by Jimmy Sieczka


So this guy has been living in the Philippines for 3 years and claims that he's experienced and seen EVERYTHING that Philippines has to offer already.

From whitening cream to MILFS to ladyboys,yep, this guy has seen it all.

He has been declared as a "persona non grata" by the city of Cebu.

Persona non grata (Latin, plural: personae non gratae), literally meaning "an unwelcome person", is a legal term used in diplomacy that indicates a proscription against a person entering the country. It is the most serious form of censure which one country can apply to foreign diplomats, who are otherwise protected by diplomatic immunity from arrest and other normal kinds of prosecution

His List of Things that will annoy you in the Philippines

WHY THEY LOVE THE PHILIPPINES

Department of Tourism Philippines' Assistant Secretary and Spokeperson told Yahoo! Southeast Asia that a single video will not affect their efforts of promoting the Philippines to the world.


If he has 20 reasons why he is not fond of our country, we can get 20 million reasons more why it is more fun in the Philippines

The important thing to remember here is that this is a one-man opinion against the millions of Filipinos who still love the Philippines.

Jimmy Sieczka's half-ass video apology. He actually has the gall to say that it saddens him that Filipinos are hating on him because of the video. What a piece of work this guy is. All I can say is watch out for the "MILFs".

Another reason why IT'S MORE FUN IN THE PHILIPPINES. Traffic enforcer's having fun on the job.

Witchcraft in the Philippines

Story and Image taken from LA Times - Witchcraft in the Philippines

Mr. Cayetano Umbalsa claims that he has been practicing witchcraft for over 60 years. Now 76 years old, Mr. Umbalsa was taught sorcery by his father when he was a little child. He resides on Siquijor Island in the Philippines.

Image taken from ThePOC.net's Conversation with a sorcerer

Image above is of Manong Edol. Another real life sorcerer. He lives on the slopes of Mount Bandilaan in Siquijor Island.

“How do you call your form of sorcery?” I began

“There are three procedures that I can perform,” Manong Edol said, “paktol, barang, and gaway. The paktol is a curse I put on a person I want to suffer or die. The barang, on the other hand, is commanding insects to hurt a person. Lastly, the gaway involves a rag or waxen doll which I pierce in the part where I want the hex victim to suffer.”

Herbert Chavez, 35, has had multiple surgeries done on his face and body to look like Superman. His fascination of the Man of Steel started, as a child, when he was given a superman costume.
Now, Herbert, makes a living as a "pageant trainer" in his home town of Calamba, Laguna in the Philippines.

He's also had a hip implant, which really is a butt implant, to make his behind look as voluptous as superman's.

Also, a pageant trainer is basically a coach that works with beauty pageant contestants on everything related to pageantry, from the way they walk on the ramp to how to answer interview questions with poise and grace.

Using the very same dragon boat that they rode to win five golds and six silvers, the Philippine Dragon Boat Federation Team took part in a rescue mission after typhoon Pedring struck the Philippines with a fury. The dragon boat team responded to Lieutenant General Arturo Ortiz call for all soldiers to help out with the rescue effort. Pinoy Dragon Warriors didn't hesitate in organizing the whole crew to help out with the rescue.

In an effort to reduce pollution in Metro Manila, local officials implemented fifteen e-jeeps and e-trikes on the roads of Makati three years ago. But the project is hardly making any impact in resolving the crisis of pollution.Government officials' objective is to have at least twenty thousand e-trikes on the roads of Manila. This plan would not only save us some money from oil expenditures, it would also move our country to a cleaner and eco-friendly way of commuting.

Lighting up homes without the use of electricity

A simple mixture of water and bleach, in a 2 liter bottle, is illuminating hundreds of homes in poverty. This concoction can produce the same amount of light as a 60-watt incandescent bulb. It is designed to last for at least five years, as the bleach prevents algae from forming. The science behind it is called refraction. When light hits the water, the sudden change of speed makes the light bend and then dispersed from all angles.