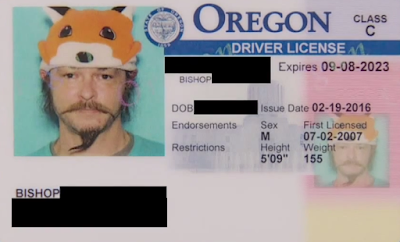 Jay Bishop, a resident of Portland, has just been granted the right to wear a fox hat to honor his religion.
According to Bishop, he is a member of the Washat Faith and that the Fox is his animal totem. He wears the hat as a symbol of his spirit wherever he goes.

It wasn't an easy fight to have his totem animal in his picture id for he actually had to hire a lawyer to defend his right. He was without a license for nine months before the DMV agreed to have his religious representation in his photo id.

Religious freedom is one of the foundational [sic] principals of the United States. It's one of the things that makes our country the greatest country on the earth

"It shouldn't matter if you wear a yarmulke or a hijab or, 'a silly fox hat,' as the man at the DMV wants to call it," Bishop said.