So, I just snagged an alternate angle of the 1915 Boston Red Sox Pitching Staff News Service Photograph with Babe Ruth, the original was actually sold for $11,850. I honestly do not know if my find is nothing but a reprint with a fake Babe Ruth signature. I thought it was pretty neat and did not cost me an arm and a leg.


The pictures below are from http://www.robertedwardauctions.com 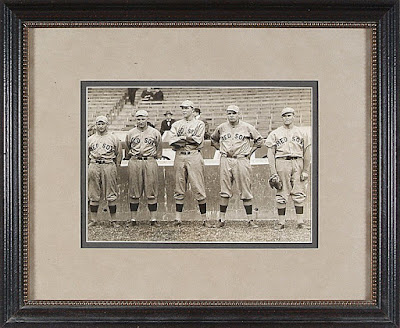 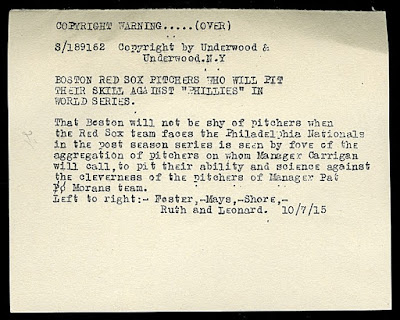 Extraordinary original news photo of Babe Ruth posing together with the four other members of the vaunted 1915 Boston Red Sox pitching staff. Accompanied by an LOA from PSA/DNA identifying this as an original "TYPE 1 - 1st Generation" photo. An "Underwood & Underwood" proprietary stamp appears on the reverse. The original paper news caption, which has detached from the reverse, is dated 10/7/15, and reads "BOSTON RED SOX PITCHERS WHO WILL PIT THEIR SKILL AGAINST 'PHILLIES' IN WORLD SERIES...