Wife Strikes Husband with Burrito, Gets Stabbed with Fork

A Florida man stabbed his wife with a fork in retaliation to being struck with a half-eaten Taco Bell Burrito Supreme.


According to police record, Carl Owen Smith jammed a fork into his wife's hand, Suzanne Hulvert, after getting hit with a Taco Bell Burrito Supreme.
Police responded to a disturbance call at a house in Crestview home and found a woman with a fork stuck in her right hand. Suzanne Hulvert told investigators that they were having an argument about Smith's drinking problem. The disagreement turned physical and ended up to Hulvert allegedly hitting her husband in the back of the head with the burrito that she had been eating. Smith allegedly fought back by stabbing his Hulvert's right hand with a fork.
Investigators found remnants of the burrito scattered all over the sofa and lampshade. 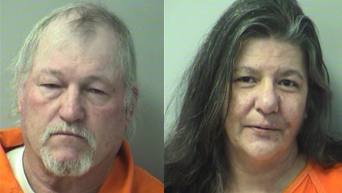 Image Source: The Smoking Gun
According to police record, both Hulvert and Smith were charged with felony battery but are now free on $1000 dollar bond.